Odin Starts To Learn He is a Boat Dog

Odin was allowed out in public on Monday - when his immunisations had taken effect, at 11 weeks old. It was a bit of a shock for him as we took him to a puppy training class. He actually did very well, managing to walk well to heel, and having great fun playing with the other puppies. It is important that he learns how to behave around other dogs, as well as other animals.

On Tuesday we set off from Cheddington with Chalice much later than would have been ideal. For Odin this was another big event - until this point he didn't know that he is a boat dog.

We realise that everything that much of what he sees is completely new to him - boats, ducks.

We picked Sickle up below Grove Lock, where we had left her the previous weekend, after the Linslade Festival, and moved on up to a mooring near to the big Tescos in the middle of Leighton. 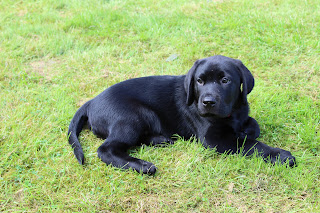 
This made me smile!

I'll largely leave it up to anyone reading this to research how much "self promotion" electioneering I actually did via the NBW site.

Suffice it to say, I made a firm decision not to, other that to point out it wasn't hard to research who I was, (or indeed any other candidate might be),  with the use of Google.

Most people could probably work out it might have been worth trying to find out about any of the 30 plus CaRT "Boater" Council candidates by the use of Google, but apparently by doing so on Narrowboatworld, I may have done an excessive amount of self promotion!

I suppose the average NBW reader may not be capable of working this out for themselves then ?

I have not checked with Sarah Hale of "Chertsey" whether they sought permission to use her picture, which they have clumsily cropped.  My assumption though is that they did not.  If so, this would be about par for the course with the plagiarism that this site regularly resorts to.

An Easy Run Back To Base

I'm only very belatedly coming back to this particular day, I'm afraid.

Events since, such as the arrival of our new friend "Odin" have rather overtaken things.

Suffice it to say, that having decided not to proceed down the Stoke Bruerne locks the previous day, we were of course left with a somewhat longer run home than had we already cleared them.

That said, when there are no restrictions, Stoke Bruerne proper, back to Sickle's home mooring is a nice gentle run.  Once the Stoke Bruerne lock flight is out of the way, it is mostly just a question of counting down the miles, which start in very rural Northamptonshire, largely avoiding all population, until you get to Cosgrove, and then the approaches through Wolverton for the long winding trip around the top of Milton Keynes - still often surprisingly rural.

As Cath was still overloaded with school-work, I did most of the time at the tiller, and the trip passed off quite uneventfully.

After many weekends wherewe have been boating, this one was to be the last before we actually get to take a weekend or two away from the cut.