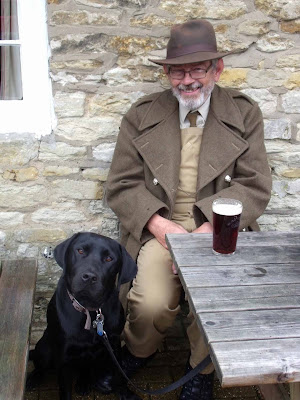 We had fought like mad to actually be at "Village at War", one of our favourite events of the boating calendar, but as the weekend approached it looked increasingly from the forecasts like it could be a washout.  We had done a "Village at War" two years previously where the Sunday had largely got rained off, so we relaise how important it is to the organisers that bad weather doesn't restrict visitor numbers to the point that no funds are raised by the event. 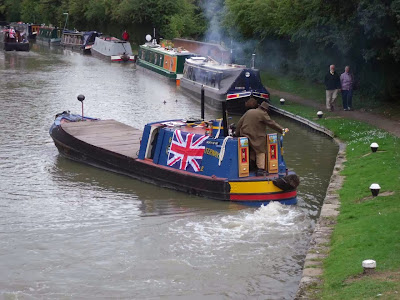 However as we moved into the weekend the forecasts got a bit more optimistic - Saturday it seemed might not be too bad, although Sunday still looked fairly hopeless. 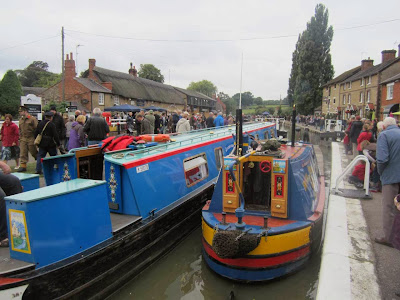 The reality was nothing like as bad as even the revised predictions.  Saturday was actually a pretty good day.  Even Sunday held fairly good until about lunch time, after which the bad weather did start to appear.  However by then most exhibitors and traders seemed fairly satisfied - a good measure of success seems to be when the burger stall runs out of burgers, and Peter Oates assured us that this had happened reassuringly quickly! 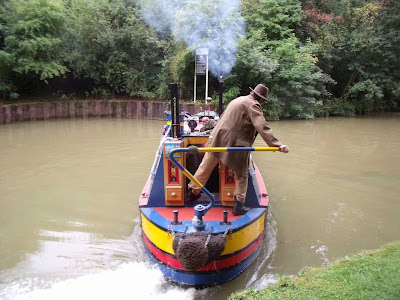 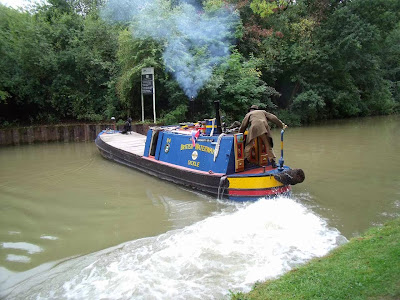 It does seem though that although we carry cameras around a lot, we are getting progressively less good at taking photographs of these events.  I have to admit a lot of time was spent eating or drinking at The Boat, and this may have contributed to a lack of pictures.  However, as is customary at Stoke Bruerne events, "Sickle" did a bit of parading, and there are at least some photos of that!

For various reasons relating to planning around other events, it turned out that the best day to move "Sickle" on the final leg of the trip from Shackerstone to Stoke Bruerne, ready for "Village at War" was the Thursday, even though we did not need to be at Stoke until a day later.

To do these point to point moves often involves two cars, and a lot of shuffling around, but that is pretty expensive in fuel, so if we can avoid it we prefer to.  We have had some success recently combining use of a bike with just one car, and we decided to try that again for this move, although we had learned the lesson that a full sized "mountain" style bike makes it much easier than one of the Brompton folders.  It does also need fairly good towpaths.  So the plan was that we go to Braunston with a bike in the car, which we would use to lock-wheel the flight, before Cath returned to the car, with bike, and then drove forward ready to assist at the Buckby locks, again using the bike.  Once clear of Buckby she would drive to Blisworth with the bike, then cycle back to meet me as I progressed South with "Sickle".  By choosing Blisworth we both avoid the parking limitations at Stoke, and the need for Cath to cycle over Blisworth tunnel.  I could drop her back there later, and she could then drive to Stoke whilst I went through the tunnel alone.

I like a good plan, but it all started to fall apart as we tackled Braunston locks, where progress ended up being incredibly slow.  Virtually all traffc seemed to be the direction we were going, up the locks, with few balancing movements down.  There were some very slow crews who were working locks slowly and ineffeciently, and a volunteer lock-keeper positioned at just one lock in the centre of the flight seemed to actually be insisting on things that made it take even longer, but probably overall wasted more water than it saved.

Again many of the pounds in Braunston were low, and this wasn't helping.  This is quite a basic thing, but in many of the Grand Union lock flights it now seems commonplace, with nobody assigned to attempt to keep the levels up.

By the time we were through Braunston it looked highly unlikely we would be tying up in Stoke Bruerne before nightfall, as we had planned.

Howeer, at Buckby things went rather more smoothly, and a couple of boats we shared with were very helpful, and, hearing we needed to make Stoke, suggested we went ahead of them.  By the bottom of Buckby it seemed just about possible we might succeed, if no more hold ups.  Cath set off with bike to do the next leg by car, and I set off with "Sickle".

I can't recall exactly where I finally saw Cath again, but of course Buckby to Blisworth is a fair old way, so she had done a fair amount of cycling by the time we did meet.  However it had worked well, as she had largely avoided the rougher towpaths, and after that we continued to make good speed, although wondered if we would have to call it a day by the time we reached Blisworth.

However some local knowledge confirmed plenty of availability of moorins at Stoke, so even if I emerged from the tunnel in darkness, mooring up should be no issue, (it of course makes little differenvce if night has fallen whilst you are in a tunnel!)

So I set off through the tunnel - always a pleasure when nobody else is in it, and you can go at the speed that "Sickle" actually seems to prefer! 4mph was easily achieved!

So we not only got to Stoke, but were also in time for a meal at The Boat - it seems to be "our local" tese days even though we live many miles from it - we almost certainly visit this pub more than any other.

I suppose the fact we took not one single picture says a lot about the nature of the day - all standard stuff, but such slow going for the first few hours.  Braunston to Stoke Bruerne at this time of year used to be an easy days boating - now it seems you can't rely on it not taking an awful lot longer than it really ought to need to.

Blog fail!  One month after some of the boating nothing has been written up.

As far as this day goes, there could have been a reason though!

I was on my own again, and although it may not sound much to experienced single handers, I knew I had to work through the locks at Hillmorton on my own.  I reasoned that with twinned locks I could take my time, as there is always the pair to each lock that someone can use i they get impatient with me!

In practice a lock-keeper helped me at the first one, but then said "you are on your own for the rest".  Not a problem, but with multiple boats going up ahead of me, using both locks of a pair, I had to stop and reverse one of each in order to use it.  The locks here were suffering the same "low pounds" syndrome that seems to be commonplace on South East waterways flights this year.  There may be volunteer lock keepers, but they don't seem to be empowered to top up pounds that are low.  One did take a photo of me though - about the only way you get pictures for the blog if single handing!

After this I had two consecutive experiences I would have preferred to avoid, as I got into a queue of slow moving boats, with all the rest travelling ahead of me.  After following one at a reasonable distance for some miles, he then waved me past at a less than suitable spot.  As I was roughly alongside him, with not much clear waterway ahead, he put the power back on.  I suggested if he wanted me to pass he should remain well slowed down  and he said "yes, I understand", but shortly after slackening off, then speeded up again!  I did get by but it was hairy.

Shortly after this another boat waved me past at somewhere even less suitable.  I should have followed my instincts and not gone, but often if you don't go past when the boat in front offers, you are then not given a chance somewhere more appropriate.  As I was going alongside  I actually said something like "Thanks, but I'm a bit nervous of doing this, as the last boat didn't actually let me past".  "No problem" says he, (or something similar), but then winds on the speed!  At this point a boat comes round the corner towards us, and I have no option but to try and stop dead.  Total mayhem ensued, and although there was no boat to boat contact, I was very grateful of "Sickle's power, but less grateful for the fact it is very hard to prevent the front end swinging to the left bank, if it is all applied at once!  I made a mental note not to pass anyone else unless I was comfortable I could still outrun them if they did all the wrong things!  I have to say this busy stretch of the Northern Oxford seems to attract more people with little idea of what they are doing than most other canals we visit.

After that it was fortunately incident free to Braunston, and I had been trying to liaise with Cath such that she would arrive there by car to pick me up at an appropriate time, as we planned to leave "Sickle" there briefly.  I was quietly hoping that those who had waved me past, but not actually let me past, would not arrive anywhere nearby.  My patience was a little exhausted by this stage, and I might have had further "words".  However after a good feed at the Gongoozlers' Rest, I was prepared to put it down as one of those unfortunate boating days that hopefully only happens once in a blue moon!