Saturday and Sunday 11th and 12th February 2012
(posted by Cath)
Sarah and Jim on Chertsey and Bakewell had invited us up to visit them, and as it was the first weekend of the half-term it seemed like a good idea to go now. It was cold, but not snowing, and the canal was free of ice. It's a couple of hours drive from our home in Hertfordshire, but we got there around midday and were shown into the warm, and welcoming cabin of Bakewell, where we were feed tea and delicious cakes from a local shop.

We began talking and the talk didn't stop until we left to go to our nearby hotel at about 10 at night. At times, I had to ask Jim to stop his story to allow me to recover, as I was laughing so much that I was crying. Sarah provided a really delicious meal in the evening.

Our hotel was a few miles away, straight down the A5 - and proved to be servicable with a good breakfast in the morning (veggie option too), for £55 for a double room for the night. We were slightly un-nerved when a siren started during breakfast, and we were asked to go outside until they had worked out where the fire alarm had been tripped.

Back to Stretton as we had been promised a trip to the Bridge pub at Brewood on Chertsey. This time we went and had a look from the other side of the canal before we went into the moorings. The "Shroppie" was built by Thomas Telford - almost Roman in its straightness. Here at Stretton Aqueduct it crosses the A5 - a  straight Roman road. 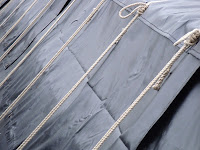 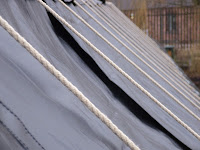 Sarah has detailed how they recently added the new topcloths to Chertsey HERE, on her blog. I became quite obsessed with the 'strings' - so I took a lot of pictures.

Then Jim winded the boat by the mooring and we set off towards Brewood with Alan steering.  Sarah said there was a winding hole past the town, but they had never used it before - it proved to be very shallow and we began to wonder if we'd ever manage to get the boat turned and back to the pub for our meal.

Back at Brewood the food in the Bridge pub was excellent. Then back to the mooring and more tea before heading off. In fact, it was completely dark by the time we stopped talking again, and we had to drive through patchy fog that was quite heavy in places. Our Sat Nav had a bit of a 'blonde' moment and sent us all over the place, which didn't help.

A great weekend, and thanks to Sarah and Jim.